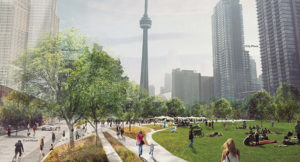 TORONTO – Just months after plans were revealed for the city’s Bentway multi-use area (originally entitled “Under Gardiner”), park-loving residents of the city’s core have something new to look forward to: a proposed 21-acre park to be built atop the railway tracks west of Union Station. Currently dubbed “Rail Deck Park,” the new proposal was […]