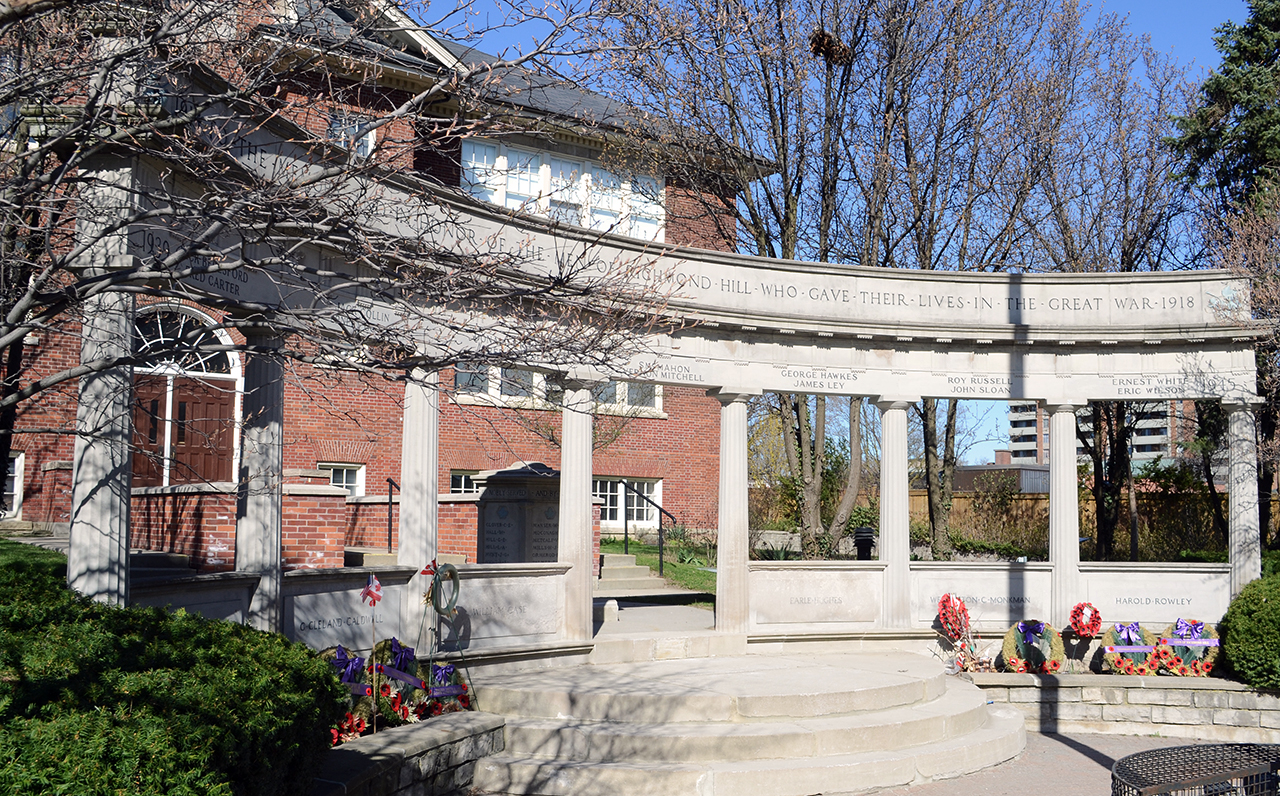 TORONTO – Derived from the Greek word meaning “empty tomb,” cenotaph refers to a tomb commemorating those who have fallen elsewhere. While the construction of cenotaphs dates back to the ancient era, these days the term is generally used to refer to a public war memorial.

A cherished public amenity for any community, the cenotaph provides a year-round quiet space for reflection and remembrance. However, these special spaces take on added meaning on November 11 – Canadian Remembrance Day – as they become a gathering place for all community members hoping to commemorate and honour the valiant efforts of Canada’s military, both past and present.

Richmond Hill’s prominent war memorial dates back to 1923, when it was completed after five years of planning and construction. Crafted by the Thomson Monument Company of Toronto, the marble structure was erected to honour Richmond Hill’s 89 residents who served with the Canadian Forces during World War One. Six of those soldiers had been killed in battle, and a number of others wounded.

Richmond Hill’s memorial shares a space with Richmond Hill Public School, a well-preserved example of classical architecture dating back to 1914.

Built with distinctive red brick and gray sandstone, Streetsville’s cenotaph was unveiled on July 1, 1926 and has stood ever since as one of Mississauga’s most unique heritage structures. The memorial contains plaques honouring Streetsville residents’ contributions to both World Wars.

In 2013, the federal government committed $25,000 towards restoring the cenotaph’s masonry, as well as moving it to a new, more prominent location within Mississauga – complete with lighting, steel railing, and landscaping. For now, though, the cenotaph can still be found at its original location at the intersection of Main & Queen.

Constructed from granite and completed in 1924, one of Toronto’s most famous cenotaphs occupies a spot in front of the Old City Hall where Remembrance Day ceremonies had already been taking place since 1919.

Originally dedicated to Toronto residents who were killed during the First World War, the monument also contains inscriptions commemorating those who fell during World War II and the Korean War (1950-1953),

Attending a Remembrance Day Ceremony in Your Community

If you plan to visit one of the above memorials on Remembrance Day, aim to get there a few minutes before 11 AM and you will likely see a crowd of like-minded community residents already gathered nearby.

If you’d like to find an official Remembrance Day ceremony in your own community, Veterans’ Affairs Canada offers a full listing of these events, broken down by both province and municipality.