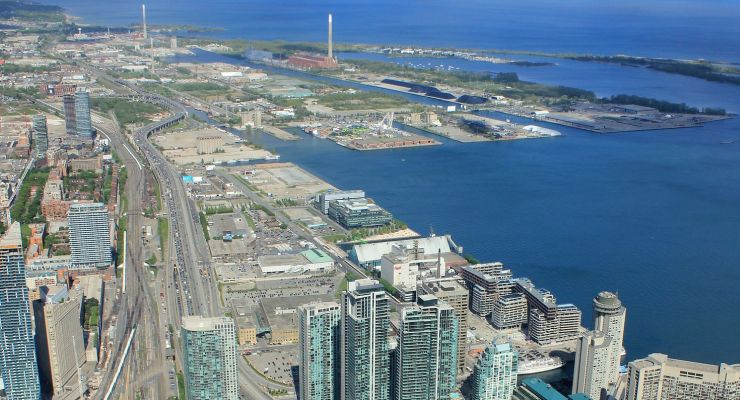 The eastern side of downtown Toronto’s waterfront has been a long-overlooked area. However, with ambitious developments that are under way or about to begin and some ambitious plans for the future, this area is now on its way to perhaps becoming the most desirable place in Toronto.

Despite being a prime waterfront location, the area to the immediate east of Yonge St didn’t hold much appeal for city residents or visitors for many years. Filled with industrial buildings, empty spaces and wasteland, it wasn’t particularly attractive and the focus for living and recreation fell to the west, continuing as far as the upcoming Humber Bay Shores area.

That situation shouldn’t and couldn’t last forever. As is seen in cities throughout the world, waterfront locations generate huge demand. They offer a great quality of life and are often close to the downtown core of major cities – making them excellent for city workers.

But how is the waterfront changing? Let’s take a look.

Generally considered to be the waterfront area between Jarvis St and Parliament St and south of the Gardener Expressway, East Bayfront didn’t have much to offer the world until a few years ago. That started to change in 2010 with the opening of Corus Quay – a sparkling new office building on the waterfront – and Sugar Beach, an urban beach park opposite the Redpath sugar factory. Soon after, new developments started to crop up, like a campus of George Brown college, and there was also the addition of a new green space on the waterfront in the form of Sherbourne Common.

With it’s great location just a short walk from downtown Toronto and following the success of the new developments, other projects soon started to appear. Tridel launched and sold out two luxury waterfront condos to the east of Sherbourne Common and is now promoting a third: Aqualuna. Oppposite George Brown College, Greenland Group is developing the impressive Lakeside Residences, which will boast two condo towers. And close to Sugar beach will be the new Daniels Waterfront community, which includes offices and retail space plus the two Lighthouse Towers.

That’s not all that’s going on in the area because just to the west, in an area that many people consider to be a part of East Bayfront, there are two huge and exciting developments; Pinnacle One Yonge on the site of the old Toronto Star building and Sugar Wharf by Menkes on the site of the old LCBO lands. Both these developments will be connected to Toronto’s PATH system and will house a variety of retail, recreational, and commercial facilities, as well as several condo towers.

All of these developments are helping to transform the Eats Bayfront area into an exciting and modern mixed-use community. The developers are thinking of the future and creating the infrastructure that communities and families need, making this a place where people will truly be able to live work and play.

Perhaps the most exciting potential development in Toronto could be taking place to the immediate east of East Bayfront. It’s the open space just before the Port Lands that is rather underused and not particularly appealing to the eye. That’s all going to change if ambitious plans come to fruition because it could become the city of the future.

In 2017, Waterfront Toronto requested proposals for the development of an innovative new neighbourhood to be known as Quayside. The winning proposal was made by Sidewalk Labs – a subsidiary of Google’s parent company Alphabet. The proposal envisions an inter-connected “smart” neighbourhood that uses “digital technology to address some of the biggest challenges facing cities, including energy use, housing affordability, and transportation.”

This will include modern development techniques that will reduce the environmental impact and costs; services enhanced by data collection and digital technology; spaces designed for safe and efficient movement of people; and much more.

Nothing is firm yet and the tender awarded only allows Sidewalk Labs to move forward with more detailed proposals, but if it happens it could be the most exciting new development in the world, never mind Toronto.

When you look at the rest of the waterfront and downtown Toronto, the Port Lands look like a bit of a lost opportunity, with so much land underused. A lot of that is because the area’s position in a flood plain makes residential development impossible. However, that will change with the ambitious plans for the restoration of the mouth of the Don River and the creation of a new island in Toronto.

With the Don River redirected and the new Villiers Island created as a result, Toronto will gain a new waterfront area that will be a joy for wildlife as well as residents. Plans for the area envision a mixed-use community with almost as many people working as living on the island. The residential and office buildings will be focused in the centre of the island, with wide green spaces, parks and recreational facilities occupying the waterfront areas. It will be a modern island community that will be the envy of many people and, with the potential of streetcar services being created to connect residents and workers to the rest of the city, this could become the hottest new neighbourhood in all of Toronto in a decade or so.