Toronto, ON – Waterfront Toronto and the City of Toronto’s Parks, Forestry and Recreation Division yesterday announced the two winners in the design competition for York Street Park and Rees Street Park.

The competition was launched in February with the aim of generating “bold and innovative park designs” for a new park located at the corner of Rees Street and Queen Quay and a redesign of the park area at the corner of York Street and Queens Quay. 40 design teams from around the world submitted proposals and ten were shortlisted to produce designs – five teams for each park.

After public consultation, the designs were then assessed by the competition jury, which was made up of five people from the worlds of architecture, art and design. The jury unanimously chose Love Park by Claude Cormier et Associés (Montreal) as the winning design for York Street Park. The design is built around a central water feature and is filled with paths, trees and lawns.

In the jury report accompanying the decision, the jury stated that they “found that this proposal was simple, elegant and timeless. Love Park engages the beautiful natural materials and elegant forms of a classic urban park and creates a contemporary and charming design that responds to all the requirements of the brief.” 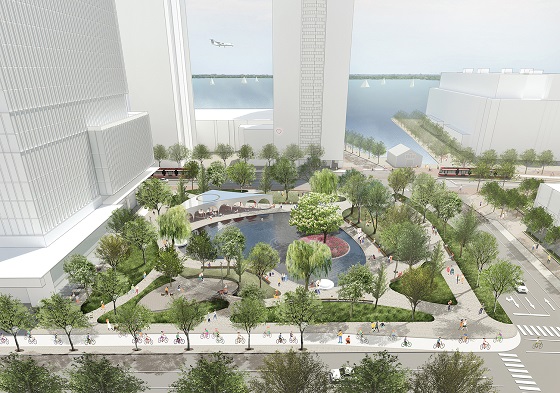 However, there were some recommendations for changes in the jury’s verdict. There were suggestions that the water feature could be altered to reduce its size and perhaps allow for boating in the summer and skating in the winter. There were also suggestions to increase the tree canopy and create more space for picnic tables.

The Rees Street competition was perhaps a little more interesting as this will be a brand-new park on land that is currently occupied by a parking lot to the south of Rogers Centre and the CN Tower. Once again, the jury came to a unanimous decision, selecting Rees Ridge by wHY Architecture (New York) and Brook Mcllroy (Toronto) as the winning design.

The design for Rees Ridge was inspired by the Scarborough Bluffs and it includes a large ridge that slopes down from the side of the Gardiner Expressway towards the waterfront. According to the original design proposal, the aim of the ridge is to create “a new vantage point for viewing Lake Ontario and a backdrop for the lively activity of the park below.” The park design also includes a new waterfall that is likely to be a popular feature for visitors, and large open spaces for people to enjoy. 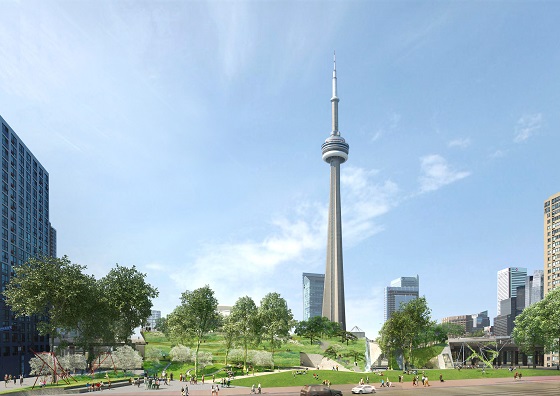 The Jury report emphasized the impact of the ridge in transforming the current landscape of the area, stating: “The Jury was impressed by this large singular move to address the relationship of Rees Street Park to the Gardiner expressway. This proposal is a bold concept for a difficult site – it pushes back and can hold its own against the Gardiner. It was felt that Rees Ridge would change the relationship of the waterfront to the downtown by visually removing the Gardiner for one long city block.”

Once again, there were recommendations from the jury. The report stated that there were concerns about the potential cost and also offered advice on how to make the park safer and more welcoming.

* All photos from design submissions to Waterfront Toronto